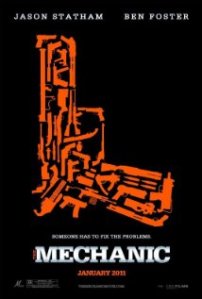 When you watch a movie like The Mechanic, it’s as if the characters themselves haven’t seen a movie since 1964, when, for ten minutes, it was a surprise to find that a politician or a higher-up in law enforcement turned out to be the villain. Who doesn’t know that, in movie-land, the people you trust most will turn out to be the bad guys? Who doesn’t know that the young apprentice to the hit man will eventually turn on him? Have I spoiled the movie for you? Really? The trailer itself gives these plot points away.
It may be that the material was fresher in its first incarnation as the Charles Bronson movie of the same name in 1972. Jason Stathan wields his grizzled snarl. And Ben Foster continues to play the kind of guy your mom warned you about (“Do you have to hang out with that Bennie? There’s something not right about that boy.”). And Donald Sutherland does a nice turn as the wheelchair-bound mentor to the assassin. Another sad example of the best actor in the room getting the smallest part, mostly as the exposition mule. That may not be entirely fair. Foster showed his chops in The Messenger. And Stathan may be more than the high-kicking killing machine he always plays. There just isn’t that much meat on this bone for these boys to gnaw on. Stathan and Foster each plays his part at a continuously high pitch of intensity—all crescendo and no diminuendo. Their performances are so boxed in by the simple-minded story that they aren’t allowed to play the full range of human emotion. You take the jobs you’re offered, I guess.
Simple-minded how? Our killers shoot up and blow up half the city, including our hero’s house on the bayou (the true star of the movie), but they never worry about leaving fingerprints, DNA, or witnesses. But that’s OK. This is a movie where evidence, witnesses, cops, and, for that matter, the laws of physics and probability would only slow the story down.
The writing is serviceable but lacks the leanness of the original, by Lewis John Carlino. Compare a revealing moment from Steve, the young assassin-in-training, from each movie. During one of the rare quiet moments in the new movie, he tells Arthur, his mentor, “I’ve always had this anger inside me.” It’s the definition of on-the-nose dialogue, the thing screenwriters try to avoid because it addresses an issue too directly. In the original movie, albeit in a different scene, Steve says, “My friends are so happy they’re killing themselves.” It’s a much more interesting revelation of character as well as being a funny paradox.
One bit of bad writing in the new movie jumps right off the screen. A character tells our hero, “I’m going to put a price on you that’s so high when you look in the mirror, your reflection will want to shoot you.” Kind of funny. The only problem is the character’s supposed to be trying to intimidate our hero, not make him laugh. Fortunately for him, Jason Stathan never laughs. It’s prohibited by his contract. At most he’s allowed a sardonic crinkle.
The title must refer to the director, Simon West, who proves that he can deliver a movie with all the originality of a photocopy. The direction is serviceable, but in service to what? Look, I like a good action-thriller as much as the next guy, but The Mechanic just makes you want to watch better examples of the breed—The Professional, Three Days of the Condor, Marathon Man, Le Femme Nikita—movies that don’t let the narrow limits of the form keep them from surprising you. All the loud, bright explosions of half-hearted efforts like The Mechanic are meant to hide the fact that there are no true surprises here, and that the only real victims of assassination are character, plot, and a few hundred billion brain cells.