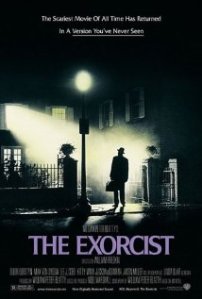 Well, I started this post with a scant twenty-four hours before the end of the world, at least according to some, and that got me thinking about good and evil, so I thought it might be a good time to think about the battle between God and the devil.

The Exorcist has lost a lot of its shock-value since it first hit theaters in 1973. The special effects have a DIY feel to them, and the language and theme feel fairly tame compared to recent movies on the subject of demonic possession. Actually, you’d probably find more shocking elements in a Judd Apatow comedy than in The Exorcist. I expected all that when I settled down to watch it again. What I didn’t expect was how polished the movie is, how subtle, how quiet—at least for a while. The most interesting part of the movie turns out to be the slow build-up—Father Merrin in the mysterious desert, the small but creepy indications that something is not quite right with young Regan, and Father Karras’s persistent doubt. For a good forty minutes or more, you’d think you’d stumbled into something like John Patrick Shanley’s Doubt. It has more drama than horror. Once the all-out bed-bucking, head-swiveling, and soup-spewing take place, I lose interest. The movie suddenly goes simple. You know you’ve lost an argument when you find yourself screaming. And that’s what so many mainstream movies do these days, each one trying to top the last. According to the preface to Lyrical Ballads, “the human mind is capable of being excited without the application of gross and violent stimulants,” but clearly Wordsworth and Coleridge haven’t seen, for instance, Robert Rodriguez’s Machete, where the hero uses his enemy’s intestine to rappel down the side of a building. 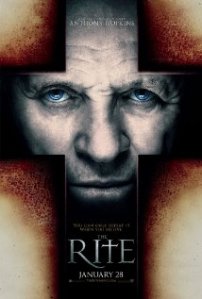 The Exorcist wasn’t the first movie about demonic possession, but it may have been the first with such high production values. The Omen came along in 1976 with no less a production value than Gregory Peck in a leading role. “A” leading role but not “the” leading role, because the devil is the true star of these movies. And since those days, every now and again, Old Bendy makes an appearance, most recently in The Rite, a movie that owes so much to The Exorcist that it should pay a royalty. Anthony Hopkins plays the soft-spoken exorcist with a nod toward Max Von Sydow. Colin O’Donoghue plays the Jason Miller part, this time out as a seminarian who’s called upon to perform a ritual for a faith he no longer embraces.

True to B-movie form, the makers of The Rite claim the movie is based on true events, reminding you of this at the end with brief descriptions of the characters’ fates. And there is some truth to the claim. The book on which the movie’s based is a non-fiction account of a California priest’s training as an exorcist. The course he took in Rome wasn’t enough for him, so he apprenticed himself to a practicing exorcist, as the character in the movie does. And it’s true that some in the Catholic Church have called for a new militancy against evil. In 2007 the Vatican did call for an exorcist to be placed in every diocese. All of these elements come into play in The Rite.

Like The Exorcist, the best parts of The Rite are the quiet confrontations between the devout priest who has come to believe also in the existence of the devil and the doubting Thomas who studies the rite only as a favor to his mentor. The younger man, played as if the actor were channeling Jim Caviezel, isn’t sure he believes in God, so it goes without saying that he also doesn’t believe in the devil. But as Hopkins points out, “Choosing not to believe in the devil won’t protect you from him.”

The movie plays out in predictable ways. I won’t spoil it by giving them away here, but you already know the moves this movie makes. Interestingly, the actual confrontations between good and evil aren’t as theatrical as they might have been, perhaps because the movie-makers felt they had to reflect the reality of what happened in the real events upon which the movie is based. What keeps your attention are the debates between the Hopkins and O’Donoghue characters, which are reminiscent of the debates between Hannibal Lecter and Clarice Starling in Silence of the Lambs.

It’s surprising that the subject of exorcism would prove to be so enduring in movies. The fight between good and evil is difficult to depict on screen. It always seems to boil down to a shouting match, with the priest shouting prayers and the foul fiend blaspheming loudly until he’s forced to say his name, which somehow expels him from his victim. This kind of showdown happens so often that you wonder why the devil doesn’t change it up a little. Instead of possessing a young girl, how about an NFL linebacker, somebody who can’t be so easily strapped to a chair or bed by an aged cleric? And why so touchy about the name? Vampires have spent years figuring out ways around their limitations, and yet the same tired trick catches Old Nick every time. And, dude, what’s with all the levitation and contortion and spewing of nails, etc.? You’re the Prince of Darkness, not a sideshow freak. I mean, it’s so, well, Gaga! Just saying.

P.S. Well, it’s Saturday, May 21st, at about 4:00 p.m., around two hours until the scheduled Rapture. Glad I got this post up before the end. Well, two hours from now here in the Central Time Zone. One hour EST. Which are we to follow? Or is it west coast time? After all, that’s the home of Reverend Camping, who’s been predicting the end of days. And why assume it’s 6:00 p.m. in the U.S.? Shoot! Has the eternity train already left the station? Have I missed the Rapture? The end of the world is so confusing! Is it possible I packed all these bags for nothing? Dang! All dressed up and no place to go.