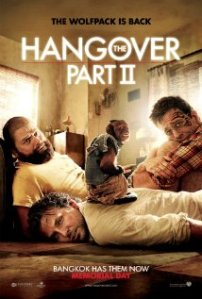 The Hangover II is about a group of friends who go to Thailand to help one of them get married. They have a few drinks. Before they know it, they wake up in a hotel room with no memory of what happened the day before. It turns out they’re implicated in a murder, conspiring to hide the body; one friend gets shot; another’s face is tattooed and he’s taken advantage of sexually; and yet another seems to have lost a finger and been kidnapped, maybe killed, by Russian mobsters.

Before I go any further, let me assure you that I know the movie is making a gazilliion dollars at the box office, which means many people are enjoying it, right? Well, actually it means many people have succumbed to the hype and paid to see it. Not the same thing as enjoying it. I heard no laughter in the half-crowded theater, only a few expressions of good-natured revulsion.at some of the movie’s more blatant attempts to shock the audience. This movie is no more than a lame haunted house in a seedy amusement park.

But maybe I’m just too sensitive to edgy comedies? Listen. I came of age in the Sixties. My generation invented sex, drugs, and rock ‘n roll. I ain’t shocked by anything. What I am is over-sensitive to bad comedies, to movies that will do anything to assault you at the expense of story, characters, and even laughs.

On top of that, The Hangover II, llike Sex and the City II, is overwhelmed by its exotic setting. The movie takes place in Thailand, encouraging every bad stereotype about the place as a den of thieves, drug dealers, and sex-workers. Even the Buddhist monks delight in beating people up. Message to the Thai tourism board: if you paid anything to the film company to promote the image of Thailand around the world, you need to ask for your money back.

One of the rules of comedy is that the actors should play their parts as if they were in a drama, no matter how ridiculous the situations in which they find themselves. No winking and nodding to the audience. (Are you listening, Jim Carrey, Russell Brand, etc.?) That’s pretty much what the actors do here. The trouble is that the situations are not ridiculous. They’re scary and violent, the stuff of crime stories and thrillers. The Hangover II is a gross-out comedy without the comedy. Over and over, it seemed, the characters took turns crying out, “How’s any of this possible?” and “What are we going to do?” Two good questions. The Hangover II was made possible because you went for the short-end money, probably signing on before you even read the script. What am I saying?–before the script was even written. And what are you going to do? You’ll probably buy bigger houses and go on to make bigger travesties. And here’s another question you might have asked: “What happened to the funny?” Here’s what I think: at some point in the filming, the funny accidentally got lopped off the movie like that finger and rolled under the couch. Apparently, no one even noticed it was gone.

P.S. Hard to keep track of how many times The Sleeper nodded off, since I kept nodding off myself.

P.P.S. Message to Crystal, the monkey: Loved you in Night at the Museum, and is that you in Pirates? Great work! But Crystal, The Hangover II? Did Pacino do Dog Day Afternoon II? Did DeNiro do Godfather II II? You’re better than the room, babe.