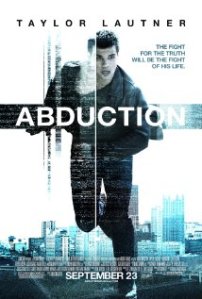 Taylor Lautner abducted me. Well, his movie Abduction abducted me. After a workout, I was looking for an adrenalin-pumping testosterone-fest, and I was even prepared to ignore the 3% rating on Rotten Tomatoes when I saw that Abduction  was directed by the great John Singleton.

The modern style of movie trailers, in which the entire plot is given away, makes it unnecessary for long set-ups in the movies themselves. You’ve already revealed the entire plot. Why dilly-dally? Let’s get down to business! And yet, this movie spends a good thirty minutes or more establishing the hero’s life as a high school student with anger problems who’s attracted to another guy’s girlfriend. So far, very 90210. But then Nathan discovers his baby picture on a missing children web site, a discovery that triggers a chase involving people who may or may not be CIA agents, rogue assassins, or Russian mobsters. In other words, the usual suspects.

Is anyone else as bored as I am with digital surveillance used as a story device? It used to be that the go-to character in a movie was the wise eccentric who explained everything the hero needed to know. That got old fast. Now characters lay claim to knowledge with vague references to surveillance hardware. Need to find someone? A flurry of finger-work on a computer keyboard and you can tie in to traffic cameras anywhere in the world and—hey, presto!—there’s your man. Trying to locate someone who’s out of a traffic camera’s reach? Just track her phone with GPS. Need to listen in on a conversation? Just hack into any nearby cell phone and turn it into a microphone. Does no one do any old-fashioned detecting anymore? And when electronic devices aren’t being used as the exposition mule, the villain has a bout of logohrrea.

While all this cell phone hacking is going on, does no one think to hack into Nathan’s phone and get the document they’re all so desperate to recover?

But what about the acting? Taylor Lautner’s doughy scowl doesn’t carry him very far. On that bland face, my-parents-are-dead! looks pretty much the same as my-parents-grounded-me-for-a-week!. The supporting players do a better job than the script deserves.

But I’ll say this much for Abduction: it’s refreshing to see a movie set in a place that doesn’t get that much screen-time. Singleton sets the story in and around Pittsburgh, Pennsylvania, culminating in a big set-piece in PNC Park, the Pirates’ stadium.

Without giving too much away, I’ll add that the problem with the climax is that our young hero doesn’t have enough of a hand in the resolution of the conflict, a major Hollywood no-no when it comes to story-telling.

Directors and actors sometimes work with a two-for-them-and-one-for-me formula. They’ll do two Hollywood craptaculars in order to get the conference-room cred to do a movie that matters. If there’s any good news about Abduction, it’s that it’s number two, after 2 Fast 2 Furious. Next one’s yours, John. It’s time for another  Boyz n the Hood.