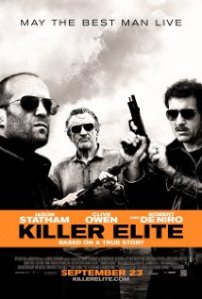 Don’t go to Killer Elite expecting a remake of the mid-70’s Sam Peckinpah movie, as I did. You won’t find it. What you’ll find is an international by-the-numbers shoot-em-up that hasn’t got an original bone in its body.

The set-up is promising. A dying sheikh lures a retired international assassin, played with typical menace by Jason Stathan, back to work by kidnaping his best friend, played by Robert DeNiro. The sheikh wants Stathan to kill the men who murdered three of his four sons. He’ll be paid well, and his friend will be set free. The only problem is the three killers turn out to be members of SAS, British Special Forces. And he doesn’t just have to kill them, he has to get them to confess to the murders on video. A number of different characters mule the exposition around, explaining to our antihero that SAS men are way too tough to die or to confess.

Which turns out not really to be true. That hissing sound you hear? That’s suspense leaking from the premise.

Yes, there’s some added interest when Clive Owen tries to track down our merry band of murderers, but that bristly little moustache Wardrobe has given him telegraphs everything we need to know: he’ll never succeed.

And now, if I may, I’d like a word with all you international mercenaries out there. I notice that you lot always do your planning in great big warehouses. First, do you really need all that space? You never use more than ten square feet of it. And in this case you used it for all of ten minutes. Did you buy or lease? Either way, was it a wise expenditure during these economically troubled times when surely even international gun-bunnies like yourselves need to pinch every penny? Any decent hotel will let a guest use a meeting room and provide you with all the whiteboards and flip charts you need (ice water and automatic weapons are extra).

And speaking of unnecessary expenses, your whole crew went to Oman just for a conversation. Have you never heard of Skype? Email? Instant Messaging? No? Time to join the 21st century, fellows. And do you always have to use the same travel agent—or any travel agent—to carry out your globe-trotting acts of mayhem? Think!

By the way, how’d you get 800-1,000 pounds of heavy ordinance back and forth through customs so many times?

While I’m at it, a brief word to the Feathermen, the secret British society of spies behind all the trouble. How secret do you think you’ll remain if you keep handing out those cute little calling cards? I know they only have the image of a feather on them, but don’t you think people will start to wonder?

Here’s how to make a movie like Killer Elite. Print out the following lines of dialogue, cut them apart, toss the slips in to the air, and whatever way they land on the floor—that’s your screenplay:

You ready for this?
I can’t do this anymore.
You may be done with killing, but killing’s not done with you.
We have to do something!
Let’s do this!
That’s not who I am; that’s what I’ve done.
This all ends today!
Game’s over.
There are no rules.
His kind don’t scare easy.
You have no idea who you’re messing with.
You played us!
You’re the one who got played.
This guy’s good.
He’s your worst nightmare.
You have no idea.
Let’s finish this!
Now the gloves are off.
Everybody gets found.
It wasn’t personal, just business.

Then add gun fights liberally, a few foot chases, a dash of exploding cars, and a smidge of girl-I-left-behind, and, well, by jingo, you’ve got yourself a movie.