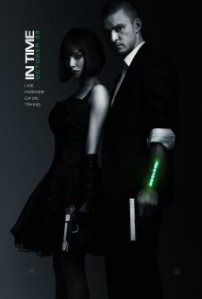 I write to you from the Occupy My Recliner movement, er, non–movement, I guess, would be more accurate, where I’m just killing time after seeing In Time, the new Justin Timberlake movie.

In the future, apparently, they’ve figured out a way to re-engineer the genetic code. The good news is we stop aging at twenty-five. The bad news is we die one year later, unless we can afford to buy more time. If the setup sounds familiar, it’s because the movie owes a lot to Logan’s Run. At least in the future imagined back in 1976, you got to live until thirty.

Despite this revolutionary advances in genetic coding—which includes a handy combination digital readout and nightlight on our forearms—not much else changes in the future. Car design, architecture, and furniture not only remain the same but seem to have regressed a few decades. Which is to say the movie looks cheap. Too many scenes are shot on highways, in industrial wastelands, around the back alleys of warehouses, and on what looks too often like a Hollywood backlot—nondescript places, in other words, where not much money was needed to dress the set. I spotted one moment where a tumbling car looked like the miniature it probably was and another where the female lead jumps from a fire escape and races down an alley in silhouette, looking like an NFL running back in a wig.

In Time is an allegory about the underclass, and this is the most entertaining aspect of the movie. In the future it imagines, time is money. Literally. And when you run out, you’re done. The movie makes literal the metaphor of living “day to day.” Instead of different social classes, there are different time zones. Crossing from one into another is about as difficult as moving from East L.A. to Dubai. Those who are rich in time live in “New Greenwich.” This gave me a chuckle, since many who work in Manhattan, and who can afford it, live in Greenwich, the third wealthiest town in Connecticut.

And of course those with all that time got it by taking it away from others. They are, to quote Terry Gilliam, time bandits. Like the robber barons of old, these time bandits believe that, for a few to be immortal (i.e., rich), many must die (i.e., be poor).

At one point, Timberlake and his accomplice, played by a slimmed-down Amanda
Seyfried, decide to get all Robin Hood about time. They justify it by asking, “Is it stealing if it’s already stolen?” Stealing time turns out to be so easy that you wonder why more don’t do it, especially the thug who’s been stealing a month here and there. But if the central concept is shaky, I suppose it’s no more shaky than many others. (Remember those “letters of transit” in Casablanca?)

For all the time that keeps running out, the movie’s pace is lugubrious beyond belief. Even the chase scenes seem laconic, if that’s possible.

Timberlake is a good actor. His was one of the standout performances in The Social Network, where he played the founder of Napster, the brash, trailblazing advisor to Jesse Eisenberg’s Mark Zuckerberg. But I’m not sure he can carry a feature, at least not an action movie like this one. He’s too quiet and sincere. He doesn’t seem dangerous enough for this kind of movie. Will Smith, another rapper turned actor, doesn’t seem dangerous, either, but he can fill the screen in a way Timberlake can’t. Smith is larger than life; Timberlake is life-sized, which makes him great for dramas like The Social Network but not so great for mindless carnival rides like In Time.

What about the other actors? They’re fine, I guess, but the script doesn’t give them much to do. They’re like the operators of the carnival ride—necessary, yes, but any hands could have yanked the levers that keep this thing in motion.

Movies are time machines. We go, sometimes, to feel young again or wise beyond our years. Or to imagine, for an hour and a half, that love lasts forever or that we lived long ago or in a time that never was and never can be. Sadly, In Time takes us nowhere but deeper into the upholstery of the theater seat. It reminds us that the real time bandits are Hollywood movie producers.

But fear not. All is not lost. As it happens, I can add time to your life. I can save you a full one hundred and nine minutes. Don’t see In Time. There. Feel it? Your life just got a little longer. It’s on me. Hey, don’t spend it all in one place.