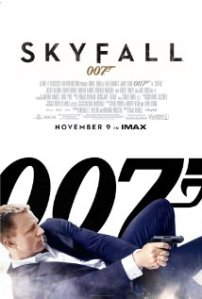 Skyfall takes the Bond franchise in a somewhat new direction. Call it the “Bournification” of Bond. Ramp up the violence, the big stagey special effects, and cut back on the cheesy rejoinders, and you have the new entry in the fifty-year-old Bond franchise.

There are many things to like in the new Bond movie. Daniel Craig plays Bond as wizened and battered by life, a man with a past. For the first time, he comes across as something like a real character, someone with regrets, someone who bleeds. This may not seem like much of an achievement–after all, isn’t this a standard story element called “characterization”?–but characterization is exactly what the Bond movies have always lacked. The various Bonds have had personalities, but no character. They have all been creatures of the now. The new Bond changes that. Slightly.

Is this enough to make Skyfall a good movie?

Yes, I know it’s making a gazillion dollars at the box office, but since when has wealth or profit been a reliable indicator of talent, brains, or quality?

Think about it. How many times have we seen the fist fight on top of a train speeding toward a tunnel? The high-speed motorcycle chase through a crowded marketplace, a chase where the only victims are produce? The psychopathic and fabulously wealthy super-villain who claims to be superior to everyone else? It’s all so recycled.

Do the big stunts amaze? I’ll tell you this much: they overwhelm the plot. Each one is like a massive Rube-Goldberg machine–an infinitely complex mechanism for achieving a very small result. Watch the subway train sequence (you’ll know the one I mean) and tell me why our villain had to go to such an extreme when all he really had to do was keep climbing the ladder? Because he’s crazy? Never a good explanation for why a character does what he or she does. Ever.

Without going into detail, I’ll just mention obliquely that this movie makes several moves meant to clear the decks and prepare the way for a fresh look and set of characters (some, anyway; reports are that Craig has signed on for two more installments).

A movie like this gives us an excellent director in Sam Mendes and excellent actors. Besides Daniel Craig and Judi Dench, Javier Bardem does a great job, out-creeping the creepiest of Bond villains). Ralph Fiennes plays the stiffest of stiff upper lips. Of the Bond “girls,” Berenice Marlohe is most interesting, playing the femme fatale balanced on the knife-edge of violence and vulnerability. But for my money, the best acting comes from veteran Albert Finney, who has very little screen time but makes the most of it. Note the nicely tossed put-down he gives Bond at one point.

I knew a man once who built himself a very expensive house but ran out of money before he could finish it. From the outside, it was huge and lovely, built with the best wood and put together lovingly by artisans of great skill. But it was nothing more than a hollow shell. There were no rooms inside, only a vast space ribbed by studs, joists, and rafters. The more I go to movies like Skyfall, the more they seem like that house–a stunning surface hiding a hollow core.