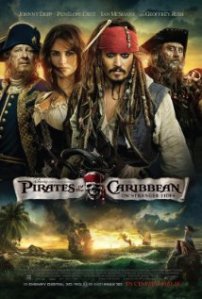 When I was about to write my dissertation, I was told to make sure my title had a colon. Otherwise, it wouldn’t be taken seriously. While watching Pirates of the Caribbean: On Stranger Tides, I realized the practice has hit movie sequels. Is it an effort to make us take the sequel more seriously?

The question of sequels is interesting, especially as we enter a period of movie-making that will be dominated by sequels and remakes. That’s right: Hollywood’s all out of fresh ideas. The conventional wisdom is that almost no sequel is as good as, or better than, the original. Godfather II is at the top of the list of exceptions. In fact, it’s the only movie on the list.

Why are sequels such pale imitations of the originals? I wondered about this as I watched Pirates, which has all the elements of the original: the charming and roguish Johnny Depp, dastardly pirate villains, high-seas hi-jinks, a dash of the supernatural, a beautiful woman, etc. And Geoffrey Rush nicely reprises his hardy-har-har role of Barbossa. Ian McShane makes an excellent Blackbeard, so excellent he takes the movie away from Depp. And Penélope Cruz brings real dimension to her role as Captain Jack Sparrow’s rival and would-be paramour.

So why didn’t the movie carry me away? I didn’t feel drawn into it, captivated by it, awash in it. Instead, I saw it as more of an artifact than as an experience.

And I think I know why.

It has to do with what’s come to be known as the “decline effect,” which I heard about on NPR’s “On the Media.” The idea is that efforts to duplicate the findings of an experiment may confirm the results, but often to a lesser and lesser degree. Subjects were shown a video in which a man robs a bank, his face clearly visible. Later, half the subjects were asked to write down a description of the robber; the other half were not. Then all the subjects were asked to pick the robber out of a lineup. Oddly, those who wrote down the description—the ones you’d expect to have a sharper memory of the robber’s features—were 30% less successful in identifying the robber than the other group. Stunning, right? But even more stunning was the finding that efforts to duplicate the study showed, yes, the same result, but to a smaller and smaller degree, as if the validity of the experiment were slowly fading away.

Is it possible that Pirates has the same elements as the original, but the “decline effect” is at play, causing each sequel to be less and less effective, no matter how faithfully the original has been reproduced? That’s certainly the case with the Harry Potter and Twilight sequels.

Maybe it’s just that all those elements were fresh the first time. And now, as each sequel drags out the same bag of tricks, they’re just not as effective. Remember that wild aerial fight in the ship’s rigging from the first Pirates movie? A similar attempt is made in this one, this time in the jungle, but it’s a lame imitation of the original. And there’s the usual swash-buckling over rickety timbers. Nothing new here. On the other hand, what about the scene in the second movie where Captain Jack escapes by running inside a paddle-wheel like a hamster as the thing crashes and careens through the jungle? That was new, wasn’t it? But it also seemed more like a stunt dreamed up by the Cirque du Soleil team than like something that arose out of the story.

The decline effect suggests that the sequel can never be as interesting or effective as the original. So why try? The corporate (or corp-pirate) answer, of course, is that no matter how bad the sequel, it will make money. But the profit shrinks a little bit with each sequel. And so does your soul.

Hollywood, are you listening? Just say no to sequels.

P.S. The theater had a D-box seat set up in the lobby, so I tried it out. The D-box is a motion-controlled theater seat that shudders, dips, swoops, and rolls in time with the movie’s effects. It was set in front of a screen that showed the Pirates trailer. I’m sorry. To me it felt as though someone were kicking the back of my seat the whole time.

I thought the best way to see Thor was an IMAX matinée on the Saturday of its opening weekend, when all the kids were there—the twelve-year-olds for whom the movie was made. Imagine my surprise in finding an audience almost entirely made up adults over thirty. In fact, the only kids I saw had clearly been dragged there by their parents, and they trooped out about halfway through the movie.

Kenneth Branagh, trying to add some interest to the comic book story, echoes King Lear. Instead of giving his kingdom to his daughters, Odin’s about to give it to one of his sons, only to change his mind and banish Thor to Earth, giving preference to his brother. The movie jumps back and forth between New Mexico and Asgard as one son learns humility and the other plots to take over kingdom of the gods.

What a waste of fine actors. Let me quickly add that it’s too soon to say whether Chris Hemsworth has enough talent to waste. Not his fault. You can’t recite these bombastic I-am-the-god-of-thunder lines in any way that would show subtlety or nuance. Except for a few funny lines that send up the superhero genre, the lines in Thor were written to be shouted or declaimed, not acted.

Sir Anthony Hopkins plays Odin complete with a nifty eye-patch. I remember years ago thinking how the mighty had fallen when Sir Laurence Olivier went slumming as Zeus in Clash of the Titans (the original). And now here comes Hopkins in his footsteps. He’s always alternated between challenging roles in serious films and villains in popcorn movies. Look at his eyes—er, eye—in this movie, and you’ll be reminded of that moment in Remains of the Day when his character, made uncomfortable by Emma Thompson’s prying, says, “Do you know what I’m doing now? I’m placing my thoughts elsewhere while you chatter away.” I swear that’s what he’s doing in much of this movie.

The women in the cast are not well-served. I like Natalie Portman as much as the next fellow, even though she wore me out with all the hang-wringing and crying in Black Swan, a big dumb movie masquerading as high art. Here, though, she can bring nothing to the inert script except a certain level of believability. But an even greater crime has been committed against the talented Rene Russo, who plays Thor’s mother. She’s given the barest handful of lines and probably all of three minutes of screen time. You might say it’s not a movie about mothers and girlfriends but about fathers and sons and, more significantly, brothers. OK, but it still seems a waste of talent. Don’t we have enough movies where men are the only people who really matter and women are little more than decoration?

The one actor who fares well is Tom Hiddleston, who plays Loki, Thor’s adopted brother. [Sidenote: one advantage of studying world literature is knowing that, if your brother’s name is “Loki,” you’re probably in for a bad time.] Hiddleston brings a level of intensity and complexity to the role that makes you feel for him when he complains to his father about being passed over, though he’s no John Cazale. Remember that incredible scene in Godfather II where he complains, “I was stepped over”? You know you’re watching a talented actor when you’re not sure what he or she will do or say next. Hiddleston is like that. It helps that Loki is the best written part in the screenplay. He’s Edmund, Gloucester’s “most savage and unnatural” son in King Lear.

The real star of the movie is the art director. Asgard looks like a cross between the Chrysler Building, the Disneyland castle, and a church organ. As for the CGI effects, they’re recycled, as usual in these movies. The big galloping monster is move-for-move straight out of Men in Black. The Frost Giants feel like the bad guys from The Mummy with a few cosmetic changes. And the giant robot, his body covered with shiny metal louvers, seems like a Transformer as designed by Levelor. By the way, if the Frost Giants can immobilize even the gods by encasing them in ice, why do they choose to punch and slash instead of just freezing them? And Thor is yet another movie in which our hero leaps from a great height and lands on one knee, making the earth shudder with the impact. This time, though,we see the leap from behind, sparing us the hero’s agonized scream as he shatters his patella.

Alas, even the 3D is a disappointment. Yes, characters point swords that seem to come straight out of the screen. But most of the shots merely bring a foreground character closer to the audience, leaving the background undifferentiated and sometimes out of focus. Avatar was another big, dumb movie, but I have to admit it’s 3D effects often took my breath away, especially the scenes in the lab, where the room felt like real space you could step into.

One of the features that made the first Iron Man movie so much fun was the humor. So many superhero movies seem to think they’re a play by Ibsen—all that solemnity and endless exposition, the “my lord” this and “my lord” that. Combine a smart, funny script with a director and star with a sense of humor, and the result was a movie that was both an embodiment and send-up of the superhero genre. Thor tries for that with a few off-hand visual jokes that show the earth-bound Thor as something less than the god of thunder. And Kat Dennings has some witty remarks as the smart-alecky younger sister to Natalie Portman’s character. And when Odin flings Thor’s hammer to Earth, it’s great fun to see the way the locals create a tourist attraction around it. But these moments aren’t enough to redeem the movie.

But in the end, Thor’s thunder amounts to little more than a rumbling stomach. As the credits rolled, the kids in the audience long gone, the adults shambled out of the auditorium, looking forward to the bright spring afternoon. The memory of Thor would fade before they hit the door.

P.S. My wife’s out of town, so I didn’t get to note at what point she fell asleep during the movie, but she did slip into the Odin-sleep while I told her about the movie over the phone.