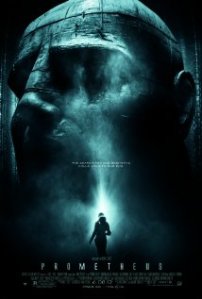 I’m a huge fan, so I’ve been waiting impatiently for Prometheus ever since I heard it was in the works. At last Ridley Scott, a guy who knows how to give us an original vision of the frightful future (Alien, Blade Runner, A Good Year), was going to sweep away the pretenders, the imitators, the arrivistes.

Sorry, but Prometheus arrives on screens this week with a squishy and derivative thud.

I mean, I felt as though I were watching a mash-up of Alien and 2001. Yes there are stunning alien vistas and the requisite heavy-duty hardware of space travel and the predictably surly bunch of crew members and of course the alien, or at least a variation of same.

But so much has gone wrong here. In particular, seven things:

1.  First we’re told there are seventeen crew members, so we settle in to see them knocked off à la And Then There Were None. But it’s hard to care when only four or five of them have any real dialogue. The others are just faces that pop up every once in a while to make us wonder who they are.

2.  Then there’s the theme. I don’t want to give too much away, so I’ll just say that it’s better suited to a Theology 101 essay.

3.  Then there’s our old friend the exposition mule. Why do our intrepid space-hoppers conclude that, because they find human DNA on a distant planet, it means that the creatures found there must be our creators? Where’s the logic in that? And later the ship’s captain explains who the aliens are and what they’re doing—based on what? Nothing, that’s what. Just the screenwriters’ need to inject information. The movie’s long on mood, thin on plot.

4.  I like all the actors. I just don’t think they’ve been given enough to do. And whose idea was it to give the excellent Idris Elba a southern drawl that makes him sound like the long lost cousin of Slim Pickens? Noomi Rapace, who was excellent in the original Girl movies (. . . with the Dragon Tattoo, . . . Who Played with Fire, . . . Who Kicked the Hornet’s Nest) plays frightened-woman-running, the role she played in Sherlock Holmes: Game of Shadows. She and Jennifer Lawrence are quickly earning the distinction for most-underutilized actor. It’s  a shame. If any actor has the intensity to be a match for Sigourney Weaver’s Ripley, it’s Rapace, but when all she’s given to do is run away, it’s hard to think of her as heroic. Michael Fassbender is excellent as the robot, a character more nuanced than the any of the others, but too similar (even in his fate) to the character played so well by Ian Holm in the original. Charlize Theron seems to be recycling leftover meanness from Snow White and the Huntsmen. Her performance is all in her menacing glare, which would be fine if she had more to do with driving the story, like the Paul Reiser character in Aliens.

5. The movie’s too long. As writer Wallace Stegner used to say about some stories in fiction workshops, “This story’s got a lonnnggg front porch!” Cutting fifteen or twenty minutes from the first half might have done wonders for the movie. The Sleeper dropped off in the first half, and I gazed on her with envy.

6.  The 3-D is pointless. One of the things—the only thing—that made Avatar interesting is Cameron’s ability to create the illusion of space, especially in the lab scenes. You feel as if you can step into the room and walk to the other end. In Prometheus the characters and objects seem to be layered on different spatial planes, but after your first moment of realization, you kind of take it for granted. Shouldn’t a movie based so heavily on spectacle provide us with, well, you know—spectacle? And has anyone else noticed that the layering of images in 3-D movies actually makes the individual objects and characters on each layer seem more two-dimensional? Yes there’s more depth to the overall image, but the object or character on an individual plane seems about as three-dimensional as a sheet of Mylar.

7.  The movie’s derivative. Everything you see in the movie was done—and done better—in Alien. We’ve been there, done that. Yes, Prometheus has more visual polish, but that isn’t enough to make a movie compelling. Character and story matter more than spectacle. Alien changed the starscape for science-fiction movies forever. Since then, every other moviemaker in the genre has been playing catch-up. And now, instead of breaking new ground, Sir Ridley seems to be playing catch-up with himself. 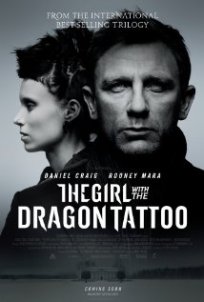 It’s true I haven’t reviewed The Girl with the Dragon Tattoo and here it is out in DVD and Blu-ray already, but that’s because I didn’t really see the point. A perfectly good film version of Stieg Larsson’s international bestseller had already been produced, a moody Scandinavian scald-fest that honors the novel without replicating all of its tiresome exposition about politics and magazine publishing. I like the trilogy despite its problems with exposition and the fact that the writer (or the translator) seems to write with his knuckles. Still, strong story and a fascinating central character and a powerful sense of scene. More than enough reason to brave the arid parts.

Along comes David Fincher with an American version of the Swedish film that feels too often like a shot-for-shot emulation of the original. Even the lighting seems exactly the same. Fincher says he had never even seen the original before shooting his film, but look at the parade scene in both movies. Even the camera angles are the same.

And why re-film it at all?

The only reason to remake it is American audiences are too lazy or too near-sighted to read subtitles. And it’s such a shame. Fincher’s movie is fine. Daniel Craig was the right choice to play Mikael Blomkvist. And though I had doubts about whether Rooney Mara would make a good Lisbeth Salander, she does a fine job (though Noomi Rapace is still the quintessential Lisbeth).

The problem is the movie just wasn’t unnecessary.

There’s a long history of Hollywood making unnecessary remakes of perfectly good (and sometimes great) European films. The most striking example before Dragon Tattoo was Let Me In, the tamer and more domesticated version of the strange and compelling Let the Right One In.

But hey, I’ll never get my lawn fertilized if I go through the whole list of Hollywood remakes. Most of them end up as sanitized versions of the original (compare The Vanishing to The Vanishing).

The magical thing that happens when you watch a great movie that happens to be subtitled —or even just a pretty good one—is that you forget you’re reading. So next time a subtitled movie comes to town, America, don’t forget to bring your glasses . . . no, not the 3D glasses, your reading glasses . . . right there on your bedside table, next to that novel you’re reading. What? You’re not reading a novel? In fact, you don’t read books at all? How said for you. 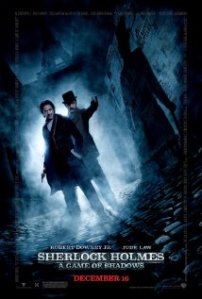 I saw Sherlock Holmes: Game of Shadows some time ago, but have only now deciphered my notes. Hence this late report.

I like Guy Ritchie. I do! And I like Robert Downey, Jr. and Jude Law. And I like the Arthur Conan Doyle stories. And I like Ritchie’s first Sherlock Holmes movie. But when it comes to the newest entry, not so much.

Just not feeling it.

Yes, we still get a lovingly detailed look at Victorian London—the era that invented steampunk. And yes, Holmes is still at his devilishly deductive best. But though I enjoyed SH:GoS, this one is played for too many laughs. The first had its share of comic moments and one-liners, but here the campy comedy is front-and-center. Most of the comedy comes from the by-play between Holmes and Watson, who seem at times like the Victorian era’s answer to SNL’s “ambiguously gay duo.”

In fact, the comedy is made so central to the movie that the plot takes a long time to get moving. It feels as though the first half of the movie is given over to the bickering between Holmes and Watson, bickering that lasts so long that I started to think I was watching a dream sequence from The Odd Couple.

During the first half of the movie, our villain spends a lot of time taking potshots at Holmes and Watson, but without any indication of what’s at stake. Since Holmes hasn’t yet pieced together the clues that indicate who is behind a number of crimes, why antagonize the sleuth by shooting at him and trying to blow him up? Professional pride, I guess. He wants to be known for the crimes he commits.

When the game  finally goes afoot, I have to say they’ve given Holmes his best adversary so far, the inimitable Professor Moriarity, apparently the only human in Victorian England (besides older brother Mycroft) who’s at least as smart as Holmes himself.

So we still have Holmes, of course, in all his scruffy and manic glory. And yes, the disapproving and admiring Dr. Watson is here. And Stephen Fry plays a wonderfully arch Mycroft Holmes. But mostly what we get this time out are personalities on parade, not characters revealed through action.

At this point in Hollywood history, action movies have devolved to the point where they’re the physical equivalent of situation comedies: set-up, joke, set-up, joke. Only it’s set-up, action-sequence, etc., leaving character more or less completely out of the equation. Anyone can pull a trigger, plunge a knife, or throw a punch. OK, I admit the action sequences here are clever, but even at this level, they lack the Rube Goldberg quality that made the earlier movie so delightful.

And sadly, the women are wasted in this movie. Sure, the Sherlock Holmes stories are the ultimate bromance, but why introduce female characters at all if you’re only going to chuck them aside at the earliest opportunity? Even the talented Noomi Rapace—so haunting in the Swedish Girl with the Dragon Tattoo that I’m not sure I want to see the Hollywood remake—even she spends most of her screen time, it seems, running through woods or gazing moodily at our heroes.

Guy Ritchie tones down his patented quick cuts and alternating high-speed and slo-mo action shots so that this outing comes across less like a Guy Ritchie film than like something by David Fincher’s amped-up younger brother. It’s meant to please a broader audience, to emulate the appeal, I think, of Pie-rats of the Caribbean, which has now devolved into a festival of mugging and makeup. Guy, step back from the edge. Please!

Maybe the franchise is already losing its steampunk for me. Or maybe I’m just worried about Robert Downey’s health. How can the man play the main characters in two superhero franchises? And now I see he’s playing Iron Man in The Avengers, too. I mean, how is it physically possible? Man was not meant to be hoisted around on so many wires or to stare at so much green-screen or to be backlit by so many digital explosions!

Did I enjoy SH:GoS? Yes. But it didn’t stay with me the way the first one did. That may in part be because, between the first and second, I’ve had the pleasure of watching the BBC’s excellent Sherlock series, which puts Holmes and Watson in modern times. Here, everything is up for grabs, with surprises at every turn. The characters (played with convincing realism by Benedict Cumberbatch and Martin Freeman) don’t bicker so much as banter. What’s the difference? Banter is what you get in The Thin Man. Bickering is what you get in Keeping up with the Kardashians.