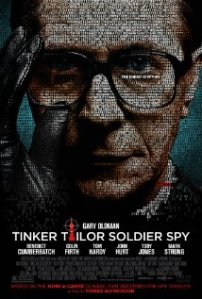 First you notice the sepia-toned look of Tinker, Tailor, Soldier, Spy. It’s as if the director borrowed the Steven Soderbergh’s color palette. And next the characteristic camera move, a slow zoom through washed-out streets, down anonymous corridors, over worn-out faces.

Agent George Smiley has been pulled from retirement to investigate the allegation that there’s a mole in The Circus. (For those who don’t speak spy-ish, that’s British Intelligence.) Smiley peers at each of his suspects in order to discover his hidden weakness, his secret truth. And in the end, the revelation of those secrets seems no more important than the peering itself. “I’m innocent, within reason,” one character says, capturing all the ambiguity of the Cold War era that gave birth to so many of the novels of John le Carré. “Innocent within reason” implies guilty within reason, too. What le Carré knows is that great evil comes into our lives not with grand gestures but with baby steps.

Gary Oldman is a worthy successor to Alec Guinness as George Smiley, the imperturbable British functionary who may have more going on behind that blank stare than he lets on. Oldman is the kind of actor who can express a whole range of emotions with no more than a millimeter’s elevation of an eyebrow. In fact, you couldn’t ask for a better cast for a movie, with Colin Firth, John Hurt, Ciarán Hinds, Toby Jones, Mark Strong, Tom Hardy, David Dencik, and a number of other excellent British poker faces. This is not the James-Bond world of evil geniuses going after world domination. It’s the world of petty bureaucrats with cracked principles and battered hearts. The spaces of their world smell of thwarted ambition, tawdry secrets, and cheap compromise. All of which make the movie much more interesting than the cartoonish adventures of Bond, James Bond.

But . . . I have to say . . .can’t help it, really: part of me wanted a little more gunplay, maybe a garroting or two. And maybe a teense more clarity. Is that so wrong?

On the other hand, TTSS is a movie that, like its characters, plays its cards close to the vest, so close that it’s not always clear, even when the cards have been laid down, just who’s holding what hand. Which is probably as clear-sighted a picture of the murky world of true espionage as any we can get.